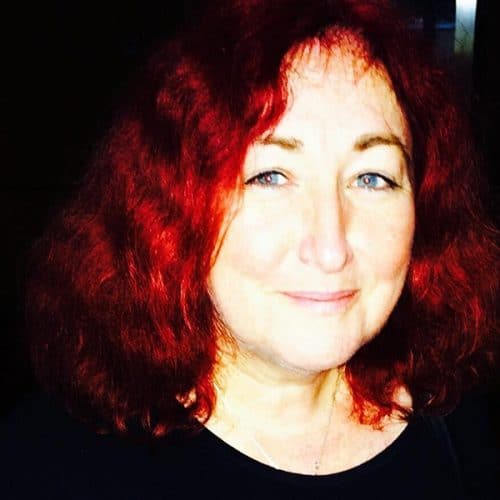 Julia Townend is a Makeup & Body Artist, guest speaker at UMAE, Olympia Beauty & War Paint (Professional Beauty), educator/mentor and product creator. Julia began working in the fashion industry as a makeup and body artist in the 1990’s initially working in the fashion industry. This led into working in television and theatre alongside the start of a teaching career at the London College of Fashion. From 2003 – 2013 Julia developed the role of Course Coordinator to set up the National Diploma, Higher National Diploma and BA (Hons) Specialist Makeup courses at West Thames College.

Throughout this period Julia created established training courses in the UK which were supported by the makeup industry. In 2010 alongside gaining her teaching certificate; Julia was awarded a National Training Award for Education. Over a consecutive 5 year period WTC graduates won the prestigious Fantasy Makeup Competition at IMATS London with supporting 2nd and 3rd places. This was equalled by graduates winning 1st Place in two categories at the World Body Painting Competition. Graduates also secured trainee positions at the BBC and the National Theatre.

Due to her leadership there are now significant well trained graduates from WTC working in the film, TV, theatre and fashion makeup industries. Julia designed hair & makeup for the Opening Ceremony of the World Skills UK 2011 hosted at the O2 London. This show was showcased as the gateway to the London 2012 Olympics. Julia has worked on a freelance basis in wigs at the ENO & ROH and Vin+Omi shows at LFW. Additionally working as a Daily Makeup Artist on the London Olympics 2012, Phantom 25, The Infiltrator, Bridget Jones Baby, The Nutcracker – The Four Rhelms, The Phantom Thread, Les Miserables/Batley & Spen YTC, War of The Worlds, Riviera (series 2) & Gentleman Jack.

Collaborations with various charities include The Katie Piper Foundation, My Makeover/Lee Pycroft and Batley & Spen Youth Theatre in honour of the MP Jo Cox. Published editorial collaborations include the “Art of Male Makeup” book and career based interviews in Warpaint and Two Magazine.

In 2017 Julia opened the JT Makeup Studio based in Leeds, West Yorkshire to offer training/ masterclasses and to develop her product range of metallic leafs and glitters. These products are available at Screenface, PAM, Illusion Magazine, Love Make-up and The Armoury. Since 2013 Julia has been the Head Judge on the Makeup & Body Painting Competition at Olympia Beauty.