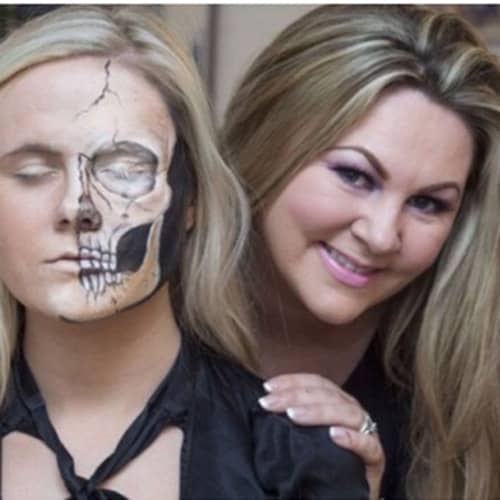 Maria Malone Guerbaa has been an artist all her life, growing up in Ireland as well and developing a great interest in film and SFX. Maria trained in Makeup Artistry at the prestigious CBMA Academy in London. After completing her studies over a ten year period Maria established herself and worked in the Barbican Theatre, Channel 4 “Horrible Histories” productions, BBC Drama “The Cut “ features for Sports Relief plus various commercials, films. Additionally Maria has worked on West End Theatre Productions including “Rock of Ages and Viva.

While establishing her freelance career Maria was asked to help in her children’s school fetes with Face Painting. This was a new area for Maria and I loved it and her love of portraits and fine art reignited with face painting. Her passion for illusion, art and portraits came alive. As a result Maria started painting herself at home and posting it on social media on Facebook, Twitter and Instagram. Using her own face and paint techniques Maria transformed into a collection of film stars, musicians, skulls and animals. These included portrayals of Stevie Wonder, Freddie Mercury and Nelson Mandela. This opened new opportunities to showcase her work workwide due the medium of Facebook and Instagram. Her work went viral and was featured on TV programmes and newspapers due to the wide response on social media. In 2014 Maria was invited by the Makeup Artist Magazine to be a guest speaker at their IMATS London event. This was filmed by a TV crew from the USA. Embracing a new genre Maria entered the prestigious NYX Cosmetics UK Face Awards which in turn led to becoming a finalist and latterly an ambassador for the company.

Happy to share her skills Maria has taught her techniques worldwide and teachs regularly at CBMA where her journey began with makeup. Her instagram followers are now 159k and when she post s new designs her work goes viral. Sought after as a makeup artist Maria works regularly with NYX Cosmetics UK, MAC Cosmetics and Smash Box. In 2018 Maria was asked to designed a colour palette for the Makeup store PAM titled “Maria Malone”, personally selecting the colours featured as these are the range colours she mixes to achieve her popular designs. This palette is only available from www.preciousaboutmakeup.com