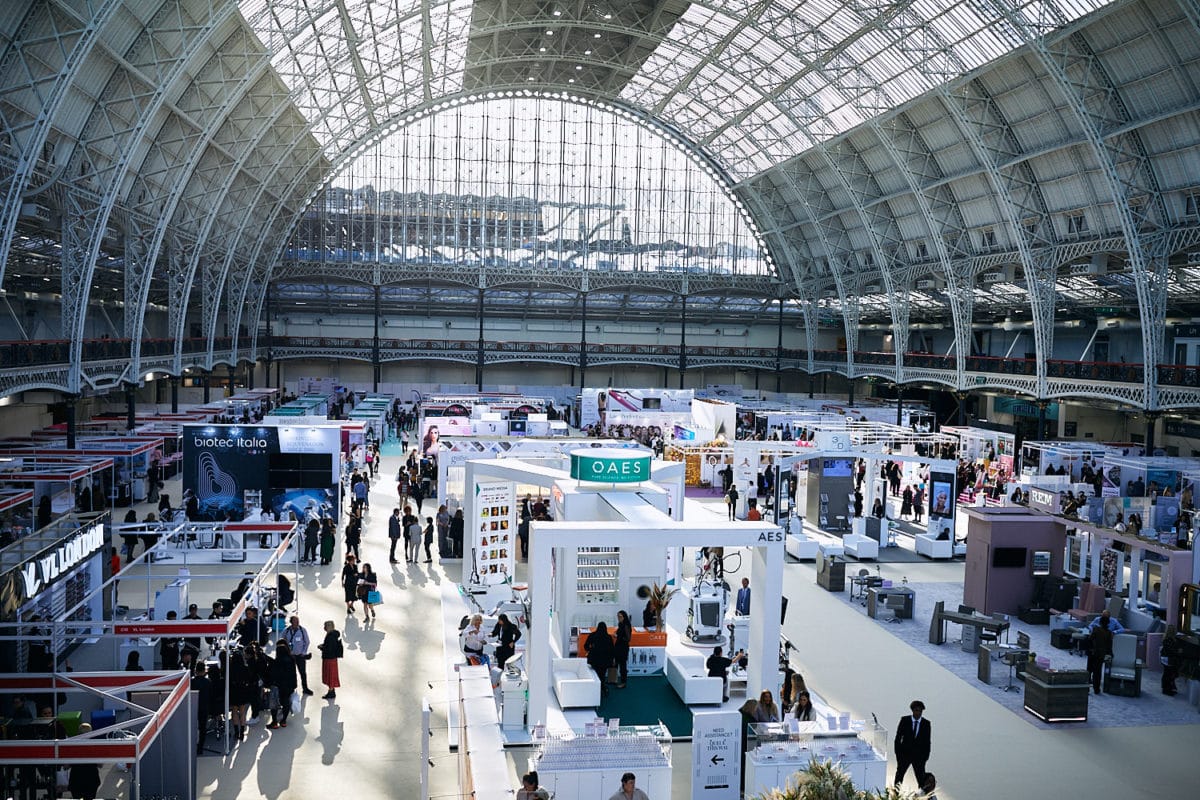 Olympia Beauty 2021 took place on Sunday 3rd and Monday 4th October at Olympia, London and reintroduced beauty professionals to the show experience for the first time since 2019. Engaged and excited, visitors discovered brands, product launches and show offers, alongside free education, stage talks and live demonstrations. Visitor quality drove the event, with new accounts being opened and high quantities of product being purchased for the first time at a trade show since the country entered lockdown in 2019.
Visitors also enjoyed the buzzing atmosphere and the ability to meet colleagues, suppliers and industry friends in the open and airy venue of Olympia London. The tall domed ceiling, wider aisles and sanitising stations welcomed exhibitors and visitors alike into the well-managed space.
Olympia Beauty 2021, two years in the making, gave feature areas a new lease of life. The Salon & Spa Owners’ Club, an executive club for owners of a beauty business (big or small), partnered for the first time with Salonology, launching a brand new stage hosted by Ryan and Hollie Power. This event also saw the launch of the Brand Discovery Sessions, offering owners a new way to do business with up to 10 dedicated brands in a single hour of networking and meetings.
“What a weekend at Olympia Beauty!  It was amazing to be able to meet up with everyone and make new friends after two long years without exhibitions. We really tried to break the mould this year with the new Salon and Spa Owners’ Club and we feel as though we achieved that. The cogs are already whirring as to what we’ll do next year! The event was well organised, nice and spacious for those still worried about large crowds and there was a real buzz about the event. It’s good to be back!” Ryan & Hollie Power of Salonology.
Additionally, The Lash Games, which celebrated its fifth anniversary, was delivered in partnership with the World Lash University for the first time.
“With it being the first time we have hosted The Lash Games, we are so proud with how the event went. All the feedback we have been receiving on how well organised it was and also how fair the competition was judged has been incredible. Our judges and speakers went above and beyond to keep standards high and bring top education to the stage. To everyone that competed, a huge congratulations. Putting yourself forward for a live competition gets you out of your comfort zone and is a brave thing to do. Everyone did a wonderful job and should be proud. Congratulations to those that placed. We look forward to seeing everyone next year!” Katie & Julie of World Lash University
Finally for the third year, Olympia Beauty hosted the live National Massage Championship. This incredible competition, stage and talks saw over 50 qualified massage therapists compete for the Judges’ Excellence Award over two days and six competition categories and was joined by head judge, Emma Gilmore for the first time.
“What a wonderful two days I spent at The National Massage Championships 2021; I had the opportunity to witness such skill and diversity of techniques amongst the contestants as they showcased their work. There was an amazing atmosphere throughout the show, which took place in the beautiful Grand Hall at Olympia Exhibition Centre, with its stunning glass vaulted ceiling. Initially, there was a palpable sense of excitement mixed with nerves amongst the contestants; as they settled into their treatments the atmosphere unveiled connection and concentration.

It was wonderful to see contestants who were new to the industry, as well as those who have been involved with the industry for decades. They all supported each other and cheered for each with other integrity in moments of success. There was a wonderful sense of different aspects of the massage industry coming together under one beautiful roof. The essence was an overwhelming sense of community over competition and although it is framed as a competition, it is an amazing opportunity to showcase your skills, and get feedback from some of the most experienced teachers in the industry;  an opportunity to meet like-minded therapists and build connections. I was honoured to be head judge.” Emma Gilmore, founder & director, School of Bodywork.
The feedback and reception to the show from visitors, exhibitors and partners across social media has been overwhelming and everyone involved cannot wait to start planning for next year.
If you have any comments you would like to put forward then please email ian.archbold@olympiabeauty.co.uk
SAVE THE DATE: Olympia Beauty will next take place on Sunday 2nd and Monday 3rd October 2022 at Olympia London.
If you’re a brand that would like to exhibit at Olympia Beauty in 2022 please email ian.archbold@olympiabeauty.co.uk